Together, our community cared for Ron King 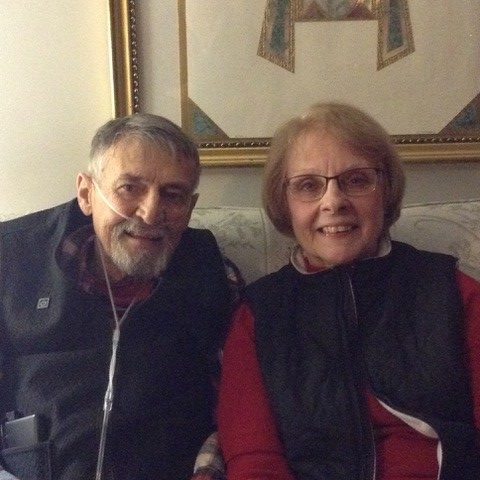 Ron King grew up in Guelph in the 50s.  He attended John F. Ross CVI, married his high school sweetheart, Brenda, and enjoyed a long career at W.C. Wood. Once retired, Ron and Brenda travelled worldwide — Fiji to Finland, Australia to Alaska. It was on the return from a Caribbean vacation in 2019 that Ron caught a virus and, within a few weeks, was in GGH on a ventilator fighting for his life.

The virus had become a very serious pneumonia with complications that took 170 days in hospital to overcome. Because Ron had had a liver transplant back in 2009, medication was tricky, and he needed ventilator support many times during his hospital stay. His kidneys shut down and he required dialysis. A feeding tube was introduced for thirty days because Ron aspirated fluids while swallowing whenever he was taken off the ventilator.

At one point, doctors told Brenda that her husband would likely not leave the hospital.  But Ron was a real fighter and eventually began to heal. During his long stay, he was sustained by the expertise of GGH’s staff —respirology, speech therapy, pharmacy, laboratory, and diagnostic imaging were vital to his recuperation. Ron and Brenda can’t say enough about the support they received from all departments. Along with the ICU nurses and a host of doctors, the Kings acknowledge the Housekeeping staff who visited Ron to keep his spirits up.

Brenda provides an example of the personal care they received at Guelph General. Because Ron was in the ICU on their 49th wedding anniversary, the ICU’s social worker and clinical team surprised them with a banner, flowers, battery-powered candles, and a video player so they could watch a movie together.  How sweet is that!  And when it came time to leave the Hospital, staff ensured a smooth transition with referrals to community support services.

Today, Ron is at home managing chronic lung and kidney issues with oxygen and regular dialysis. He drives Brenda to appointments, runs errands, and drinks Tim Horton’s coffee with old friends every week. He says that he feels pretty good and is very grateful for the excellent care he received at Guelph General.

While Ron had been a GGH patient a few times in his youth, with the then-usual tonsillectomy and an ED visit for a few stitches, he never expected to spend almost half a year in-hospital care. When asked for his thoughts on the episode, he says,” As a kid, the hospital was a bit scary, but now I’m not afraid to go there at all.  Everyone is so caring and supportive; everything is well explained. We’re lucky to have these services here in our community.”

Take care, Ron, and thanks for sharing your story!