Together, Our community cared for Axel, Oscar and their parents Ariana and Mike Christie 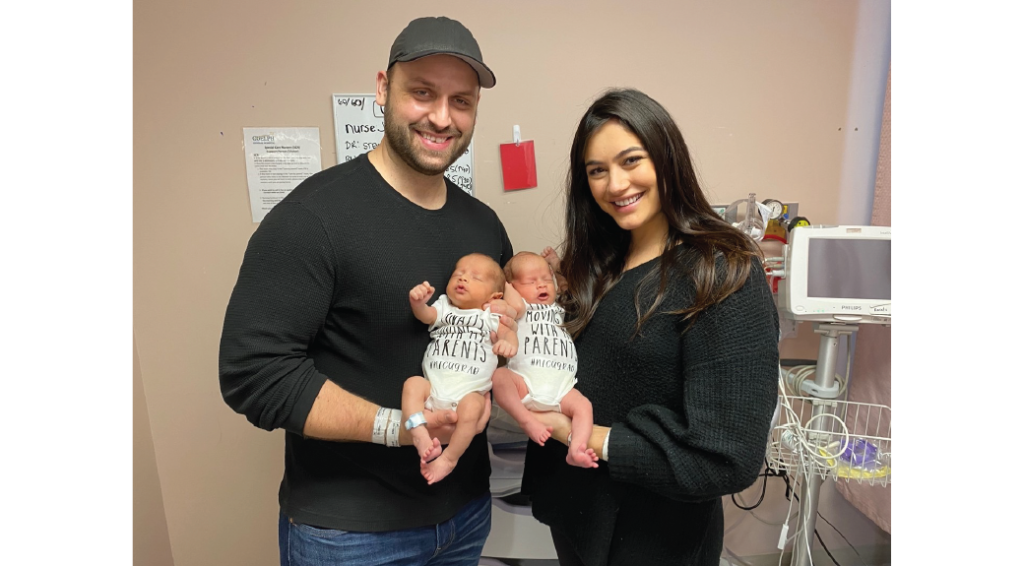 Oscar and Axel are fraternal twins, growing fast and keeping their parents very busy.  And even though they are busy, parents Ariana and Mike Christie are breathing easier now that the boys are home. The twins were premature at 34 weeks and stayed in the Hospital’s Special Care Nursery (SCN) for the whole first month of their little lives.

Ariana recounts how frightened she was when she went into labour early. “I was scared and worried that the Hospital might not have the facilities to handle the situation.  But I was reassured by the nurses and my obstetrician, who were all so knowledgeable and helped us through it.  They explained everything; we were never alone and knew that we could trust them.”

She says, “The Special Care Nursery staff worked as a team, answering all my questions, making me feel comfortable.  And it was gratifying to see familiar faces and feel the homey atmosphere whenever we arrived at the unit.”

Mike agrees and shares an example. “Oscar was sent to McMaster for ten days because of his reflux problems, and the staff here ensured that he had little “scent hearts” with him that would remind him of his brother and mother.”

The Christies are aware of the improvements planned for the Special Care Nursery as part of the Hospital’s most urgent Together, We Care fundraising campaign, and they heartily approve.  They know that the Hospital has plans to expand the SCN and maximize comfort and privacy for families. The design will allow more parent-baby bonding time and better outcomes for babies when families are together and included in their care. It will offer a special room for twins and allow more sick babies to remain at Guelph General instead of being transferred to a larger hospital.

Mike and Ariana applaud the changes.  “Having Oscar transferred to McMaster was a real strain, and his return, when he improved, was delayed by the lack of beds at GGH.  Being able to sleep with our babies, having a little more room would also be a definite improvement,” says Ariana. “With twins, we were a little cramped for space.”

Oscar and Axel are thriving now — at four months, they weigh in at 12.1 and 13.6 pounds! Ariana and Mike are relieved, looking forward to all the adventures of parenthood, and very thankful to Guelph General Hospital.

The Together We Care Campaign, which includes the renovations to the SCN, has reached $31M of its $34M goal.

Photo:  Mike and Ariana Christie holding month-old Oscar and Axel on the day they “graduated” from the Special Needs Nursery.